We start March with all the energy in the world. A month full of joy because spring is also coming soon. For this reason, today at Xior Diagonal Bèsos, your exclusive university residence in Barcelona, ​​we tell you what are the best plans in Barcelona in March that will make you fully enjoy the magic of Barcelona and that you cannot miss.

We welcome you to our blog with the best tips for students from all over Barcelona!

Discover the Feminist museums in March

March also means that it is the month of women. For this reason, in Barcelona there will be nine museums in the city that this 2022 will again join the International Women’s Day, to celebrate the feminist cycle ‘Little stories, great women’.
We refer to a series of videos in the format of stories that deal with the history of women who are leaders in today’s world, both in culture, sports, science and the arts.

On this occasion, it should be noted that it has been organized in a completely virtual way, so that all those interested can follow the storytellers through the YouTube channel of Little stories, great women. Take note because the appointment begins next Monday, March 8 with a well-deserved: Happy Day to all Women! 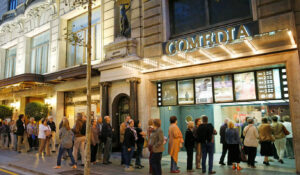 Photographic exhibition at the Mapfre Foundation

If you like photography, you have probably heard of Marta Dahó. We are referring to a curator and graduate in Art History, famous in the world of Photography, who has organized an intensive series of online conferences in March in collaboration with the prestigious KBr Photography Center of the Mapfre Foundation.

In this photographic cycle we want to highlight the relationship between photography and exhibition from all historiographical and theoretical perspectives. Then, the conferences will take place every Tuesday in March and will continue even during the month of April, also in the native language of each guest and will be completely free.

So if you like photography and want to delve into the theme of the exhibitions, whether you are a photographer or an amateur, we encourage you to sign up for each presentation and conference. We are sure that you will learn a lot.

To all the fans of the vintage concept, we tell you that March is full of very interesting markets in the city. For example, if you are one of those who prefer vintage clothing markets and especially bargains, make a good note in your diaries because for yet another year Nau Bostik becomes the epicenter of second-hand clothing in Barcelona.

So next Thursday, March 4, we invite you to enjoy the BooM Market, where this year there are more than 100 exhibitors with the best vintage clothing at incredible prices.

Concerts against gender violence in Barcelona

We continue with feminist issues and the defense of women’s rights. In this sense, music is not an exception to raise the voice of support for women. For this reason, one more year, the mythical Luz de Gas room will offer a live concert with a solidarity motive against gender violence.

So take note because next Monday, March 8, on International Women’s Day, the curtain will be opened by singer Maria del Mar Bonet and other established artists such as Mayte Martín, Gemma Humet, Beth, Sara Roy, Elena Gadel & Marta Robles and Balkan Paradise Orchestra. 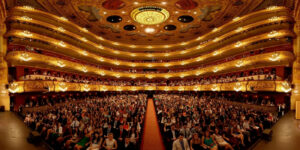 Watching a series at home is not bad at all. But going to the movies is a unique experience that has no comparison. That is why below, we tell you what are the movies that you can enjoy this March. Take note!

Drive my car
Ryûsuke Hamaguchi shares a Murakami short story and magically expands it into three captivating hours (the credits don’t roll until the 40th minute!). Reeling from the sudden death of his wife Oto, theater director Yusuke heads to Hiroshima to stage ‘Uncle Vanya’ with his young chauffeur. The genius of the film is how the script takes the themes of Murakami’s story (loss, love, jealousy, healing) and finds an echo in Chekhov’s famous work.

Licorice Pizza
Paul Thomas Anderson’s most acclaimed film to date is this San Fernando Valley palimpsest with so many bubbles it practically bursts off the screen. The biggest blow to ‘Licorice Pizza,’ however, is its casting. Alana Haim of the Haim group is Alana Kane, 25, a photographer’s assistant bewildered to run into Gary Valentine, a high school student ten years her junior.

Tammy Faye’s eyes
A gorgeous Jessica Chastain is the queen of the party in this biopic about a popular televangelist in America in the 1970s and 1980s. Tammy Faye Bakker and her husband, Jim, built a religious empire from scratch with feet of clay, with a network of television networks that connected with his program and even with a theme park project dedicated to the evangelical faith. Andrew Garfield accompanies Chastain in an x-ray of the fragility of the American dream. 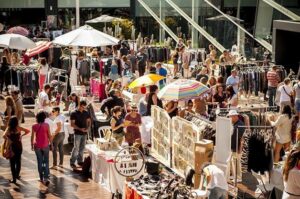 Cosmic chant
Marc Sempere and Leire Apellaniz show the viewer their fascination for an innovative artist in a film that escapes the usual portrait to talk about the personality and work of Niño de Elche, but also about the shock wave that the musician provokes in his path. A look that allows us to understand the impact of this creator, to photograph the cultural moment that Spain is experiencing, and to make a profound reflection on the role of tradition and heterodoxy in an art such as flamenco.

Uncharted
Sony hands over the start of a new franchise to the newest goose that lays the golden eggs, Tom Holland. The protagonist of ‘Spider-Man: No way home’, the only movie capable of recovering pre-pandemic collections, puts himself in the shoes of an adventurer who travels the world as a treasure hunter. With Mark Wahlberg as a partner in adventures and Antonio Banderas as the bad guy, this version of a popular video game aims to break the bad luck of other failed adaptations, such as ‘Tomb raider’ or ‘Assassin’s creed’.

Here’s proof that animation can conquer the world just as accurately as it delivers magical flights of fancy. ‘Flee’, by Jonas Poher Rasmussen, tells the story of the French-Danish director’s friend, a gay Afghan refugee who is desperately trying to flee the tyranny of the mujahideen and come to terms with his own sexuality. Possibly the most political film of the year.

Cycle of the Filmoteca de Catalunya in March

For the most romantic who prefer classic cinema in an unmistakable place, pay attention because the Filmoteca de Catalunya in March brings you a very interesting program that you should not miss.

Among other contents, the retrospectives of Theo Angelopoulos, Kelly Reichardt, within the framework of the famous Americana Film Fest, Jean-Claude Rousseau, with the collaboration of Xcèntric and Zumzeig, as well as the Dostopos collective in ‘Short Days’, the exhibition ‘ The keys to the still photo.

In addition, it also highlights the cycle of Spanish Cinema of the 40’s and the celebration of the 50th anniversary of Drac Màgic in its children’s programming. Undoubtedly, the best way to enjoy cinema as you always wanted can be found at the Filmoteca de Catalunya.

A dose of theater

If you like the theater you should know that Barcelona offers you a great theatrical offer that you should not miss.
For example, in March you can enjoy the play by acclaimed British playwright Caryl Churchill, who tells the story of a dysfunctional family made up of a mother, father and aunt who are at home waiting for their daughter Susy to return from far away. Australia.

In this waiting situation, all the characters can do is think and imagine what will happen in a few minutes. With Albert Pérez, Vanessa Segura, Alícia Puertas, Marc Tarrida and Sara Morera.

A classic for theater lovers throughout the year is undoubtedly the Teatre Neu de Gracia. A unique place in the city that offers you all kinds of staging so you can have a laugh and have a great time.

If what you are looking for is a good dose of humor and comedy at the highest level, come to the Neu theater where you will always find a perfect performance for your mood, whenever you want and with whomever you want.

Do you like our recommendations for March in Barcelona?

We hope that after these important facts you can enjoy the city in one of the most beautiful months of the year in the Catalan capital.
If you want to know more about Xior Diagonal Besòs, your exclusive university residence in Barcelona, ​​we encourage you to follow us on Instagram so that you are always up to date with the latest promotions and news for this 2022.

This website uses cookies to improve your experience while you navigate through the website. Out of these cookies, the cookies that are categorized as necessary are stored on your browser as they are essential for the working of basic functionalities of the website. We also use third-party cookies that help us analyze and understand how you use this website. These cookies will be stored in your browser only with your consent. You also have the option to opt-out of these cookies. But opting out of some of these cookies may have an effect on your browsing experience.
Necessary Always Enabled
Necessary cookies are absolutely essential for the website to function properly. This category only includes cookies that ensures basic functionalities and security features of the website. These cookies do not store any personal information.
Non-necessary
Any cookies that may not be particularly necessary for the website to function and is used specifically to collect user personal data via analytics, ads, other embedded contents are termed as non-necessary cookies. It is mandatory to procure user consent prior to running these cookies on your website.
SAVE & ACCEPT